Newspapers continue to evolve, both in print and online. The European Newspaper Award shows the latest trends every year. If you look at the examples on the website www.newspaperaward.org or work through the yearbook (order HERE), you will notice that the slogan “Yes, we can!” By Barack Obama fits well with the positive, optimistic attitude that the makers of excellent work mediate.

This year, the best newspapers in Europe come from Luxembourg (Tageblatt), the Netherlands (De Limburger), Norway (Morgenbladet) and Germany (Handelsblatt). All in all, 185 newspapers from 27 countries took part in the 19th European Newspaper Award.

Large number of submissions in print and online. Once again newspapers from most European countries competed for the 19th European Newspaper Award. There is no drop in the number of pieces of work submitted, and the high quality impressed the jury.

Main trend: gradual further-development in the print sector. Newspapers have many subscribers who are not necessarily open to every new feature. That is why there tends here to be a gradual further-develop-ment rather than abrupt changes. The general trend is away from full, self-contained text and towards alternative story forms and visual storytelling. Major topics in many newspapers are spread across double-pages and presented with maps, infographics and charts.

Online trend: film projects and “Snow Fall” stories. Six film projects and 14 multimedia stories received awards. These related to, for example, portraits of people in the region (Main Post, Würzburg) or elucidating the voting system in the USA with the aid of animated infographics. Especially impressive was a reportage by Politiken, Denmark, on rescuing refugees from the Mediterranean.

Social media. Newspapers are naturally also active in the social media sector. For that reason there is a separate category for these. One distinction went, among others, to the Axel Springer Academy for the snapchat project “Sachor jetzt” (Hebrew for “Remember now.”). This was developed by 16 volunteers of the Academy. Documentation of this project can be found at: www.sachor.jetzt

Magazine look. A trend that started particularly in Northern Europe is that of designing newspapers to look like magazines. The Tageblatt, Luxembourg, has developed more in this direction in recent years. Cover stories that are carried on inside the paper and alternative story forms form part of the daily repertoire of this newspaper, which this year won one of the four main prizes.

1 The Saturday paper is transformed into a a weekly paper.

This is what‚ Allgemeine Zeitung Mainz‘ is doing together with their joint publishers. The volume has been extended and new topics have been inserted, which make for a relaxed leisure time reading. Each front page of the local sections on that day is almost devoted to a single issue.

More and more newspapers have decided to use a big lead-in topic. In this respect, ‘Tageblatt‘ from Luxembourg, published in the Berlin format, is certainly prominent in the German language area. Many other newspapers like ‘Kleine Zeitung‘ from Graz (A), ‘Polska‘ or ‘Delovoy‘ from St. Petersburg use a tabloid format which makes it easier for their covers to resemble posters.

In recent years, newspapers have experimented with this and other online-formats. In this year‘s competition it has become evident that this new journalistic tool is now common knowledge and professionally used.

Already at the last competition, news apps that could be navi-gated intuitively had been awarded. Examples are ”Der Tag“ – The Day – of ‘Frankfurter Allgemeine Zeitung‘ (FAZ) and “app12” of ‘Tages-Anzeiger‘. Mostly lengthy texts are offered on smart phones. A high user rate is indicative of their success.

Alternative story forms, visual story telling, photo reportages – all those journalistic genres continue to be used for the printed media. The trend towards a stronger visual presentation of contents is still there.

‘Berliner Morgen-post‘ and ‘Tages-Anzeiger‘ stand out because of their great number of projects containing data journalism. But it seems that there are only few specialists who can make large amounts of data accessible online.

7 Increase in infographics in Central Europe.

For some time the Iberian Peninsula and Greece had been the trailblazers for double-page infographics. This journalistic feature has now crossed the borders of Denmark, Great Britain, the Benelux states and German speaking countries.

Since its foundation in 1998, the competition has been organized by newspaper designer Norbert Küpper. The 19th contest involved 185 newspapers from 27 countries.

In the first four years, the award ceremony took place in the Coronation Hall of the Aachen City Hall. In 1993 Norbert Küpper founded the European Newspaper Congress, where innovative print and online projects from across Europe are presented. The European Newspaper Congress has been held in Vienna since 1994. It is carried out by the Verlag Oberauer from Salzburg in cooperation with Norbert Küpper.

Alongside the Awards of Excellence there are four main prizes. The European Newspaper Award has always been divided up into local newspaper, regional newspaper, nationwide and weekly newspaper categories, because these four newspaper types have different resources and target groups.

This newspaper appears in Luxembourg in Berliner format and has a circulation of about 20,000. The newspaper employs 30 journalists, six photographers and four layouters.

The Tageblatt has been continuously developed as regards content and design in recent years. The front page shows just by its visually well-prepared theme that the paper is produced more in the style of a weekly newspaper. Instead of briefly touching upon a number of topics it presents a few well-chosen ones in detail for the reader. Not only text but also alternative story forms and infographics are employed. There is no doubt about it, the Tageblatt is European Newspaper of the Year and will be able to display the proof of this at its masthead for a year.

This newspaper appears in the province of Limburg in tabloid format. The newspaper has a circulation of 122,614. Editorial staff include 98 journalists, 17 photographers and 12 layouters. The newspaper was given an award during the very first European Newspaper Award competition. At that time it was still appearing in full format and bore the name „Dagblad de Limburger“.

De Limburger has a very modern, visually emphatic front page. Two to three topics are presented here. New layout variants are always selected. In that way an impression of sameness is avoided. The newspaper has various sections, where the style of the front page is carried on. These include the local sections and Scala, Horizon and Sport. Here likewise a great deal of background is offered and fewer short reports. At the week-end there is the L Magazine – Lekker Weekend (Great Week-End). In this magazine the editors demonstrate creativity in their choice of topic and layout.

This newspaper has a circulation of 122,015. Of these 44, 537 are in e-paper form (German Audit Bureau of Circulation (IVW) 3/2017). Around 200 editors, correspondents and permanent employees work for the Handelsblatt, six of them layouters, five photo editors and seven infographic artists. The newspaper does not have its own photographers.

Because of its handy tabloid format the Handelsblatt is pleasantly different from other newspapers. Daily two-page infographics were recently introduced, and the cover stories at the week-end are virtually without equal in Europe for their level of detail and magazine-style layout. The process of transformation in the direction of electronic media is well under way here, because one-third of the circulation is in e-paper form. This means that customers are very open to innovation. A highlight of online activity is the publisher’s Morning Newsletter, which is often quoted in other media.

Morgenbladet is published in Oslo with a circulation of 29.000 copies and online on morgenbladet.no. The newspaper has an in-house staff of 29 editors, journalists, photographers, Art Director and marketing as well as a large portfolio of freelancers. 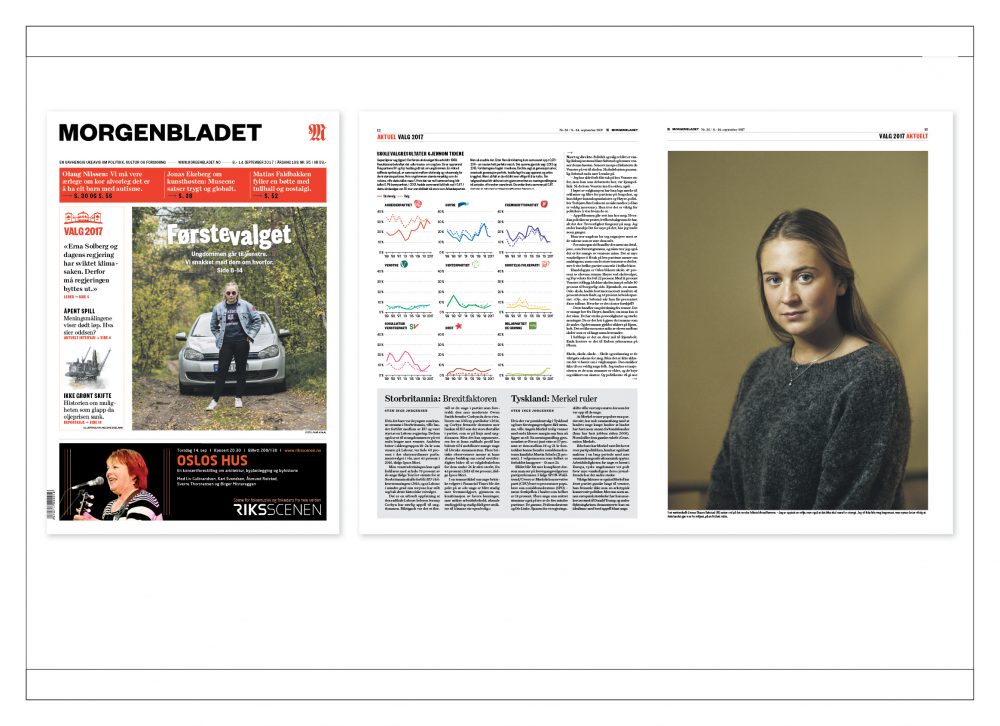 The Morgenbladet can be described in three short phrases: 1. cover and cover stories, 2. big photo-reportage and 3. topics that are visually got up with illustrations. The front page is usually devoted to a single topic. On the inside pages the treatment of images and page layout is very varied and because of the tabloid format very magazine-like. One highlight is cartoons on international-political topics. An attractive detail is the infographic of the week at the bottom of page two. All in all Morgenbladet offers an unmistakable profile content- and designwise.

The Jury of the 19th European Newspaper Award

The 16 members of the jury are from nine different countries: Greece, Denmark, Finland, the Netherlands, Portugal, Switzerland, Ireland, Norway, and Germany. They are journalists, scientists and designers. 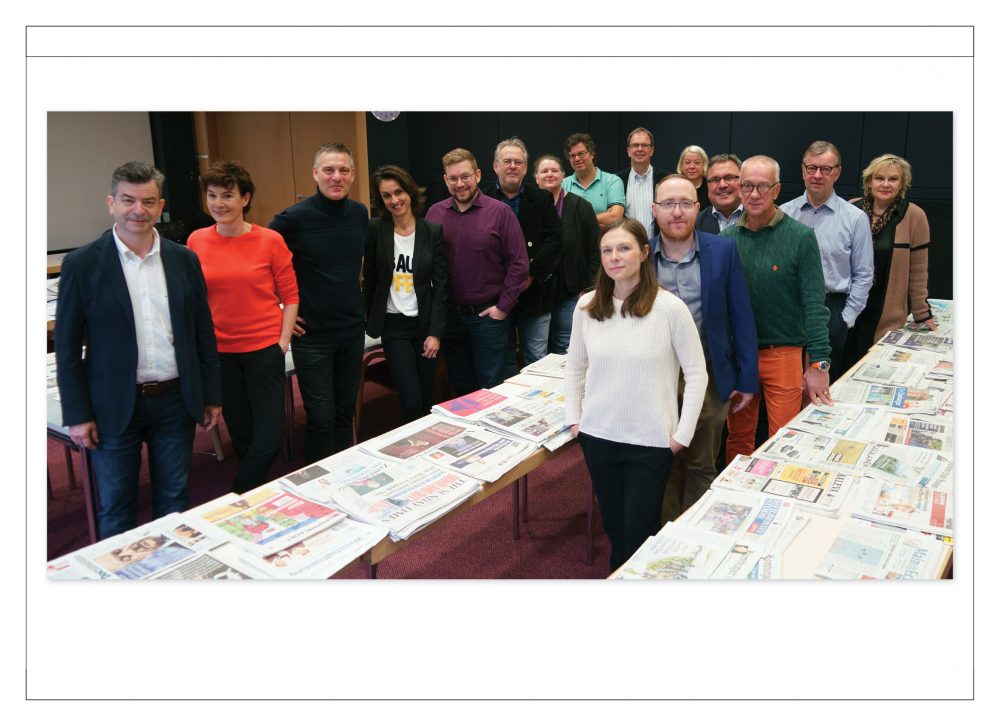 The jury of the 19th European Newspaper Award (from left):

The members of the jury are excluded from the assessment of their own contributions.